The air is warm and comfortable. The October midday sun is descending and stretching the tree shadows over the largely horizontal landscape. I have forgotten any uncomfortableness in the rugged vehicle seat I have been shifting in. This is the magical place I had dreamed about for many years, wild Africa and what could possibly be more exciting? The Toyota Land Cruiser is weaving its way through dirt passageways along the land fingers of the Okavango Delta in northern Botswana scouting for wildlife.

The coincidences of unique land forms, abundant water flow from the north, and a very flat interior desert landscape have created a natural Eden here for wildlife. Because of its remoteness this environment has resisted the rapacious exploitation of Africa over the centuries from the outside world.

The two vehicles in our safari group of ten are stop below a low green raised mound that balances a large fallen decomposing tree. Occasionally, peeking from above the log, are sets of soft rounded ears next to small round eyes. Emerging from the shade of the surrounding mopane woodland into the bright rays of sunlight, we all hold our breath, as the full outline of a these little, one month old, lion cubs scramble to the top of the large log, one by one, to get a better look at us. They playfully bat and tackle each other as we smile at their pranks as more eyes and ears pop up from behind their protective hiding cavity. Seven light orange furry and spotted, less than ten pound and toy like packages, begin to romp together in the warm afternoon light.

Five adult lions, four females and one male are nearby enjoying an afternoon nap. Lying on their sides or backs with feet fully stretched out, eyes closed, and amazingly they allow the youngsters to play in the midst of this new human presence without alarm. This is Botswana and wildlife is truly cared for and highly valued for its very existence. Ian Khama, the country’s President, is a deeply committed enthusiast who’s top priority is to provide a sanctuary and protection for wildlife. Speaking recently, he said: “Botswana must never allow any animal species or plants in the country to become extinct”.

We are experiencing an evening game drive from nearby Vumbura Plains Camp where we landed this morning in a small aircraft. The drivers are expert wildlife guides and intimately know these animals. The number of vehicles near animals is limited. The amount and overall length of dirt roads is regulated and limited. As treasured guests we are permitted to experience a rare closeness to wildlife, tolerating our presence, because years have been spent, by these guides, being totally respectful and sensitive to wildlife needs.

Vumbura Plains Camp is a model for Africa and its example is being shared worldwide. This is one of the most cherished places to visit in all the world. It has been built and is operated sustainably to preserve what is natural and not create a huge footprint of man on the earth. The beautifully built lodges and cottages have no concrete foundations but instead sit above the land on stilts, or driven piles. The buildings are cared for by local and regional people which have been trained and invested in. A share of the profits from Safaris by the operators of this Camp are put back into wildlife conservation.

The pride of lions rises and decides to move. The guides start their engines and slowly maneuver to a location they anticipate where the animals may be crossing. Cameras are firing fast as lion cubs and adults keep forming different groupings as they wander on their trek. The backgrounds are a pleasing green and the light is warm and perfect. This wonderful caravan of life finds a new spot to hangout and all flop down to rest in a small circle. Humans also need the break from this excursion.

All is quiet when up pops a precocious cub. Slowly he saunters over to the resting young male adult, a few yards away, from the main body of sleeping females and cubs. “Uncle” is what the guides call him, because he is not the sire of the cubs but a brother to the alpha male of the pride. Four cubs are from one female and the other three are from another in the pride. When he approaches within two feet of “Uncle” the cub’s mother rises in an instant, bounds over to the innocent young male, to box his ears, snarl, and exposing her teeth. Two seconds of a lightning fast fight and then it is over with everyone returning to their places.

Infanticide is a very real part of lion life. Wandering males without a pride may try to destroy cubs that are not their own to mate with a new female. Witnessing the protectiveness of this mother is a reminder of the deep bond she has with her offspring and the dynamics ever present in the wild. This might be evidence of the precocious cub’s future indomitable personality.

This safari has been arranged and guided by Frans Lanting and his wife Chris Eckstrom. Frans is a world renowned photographer having spent over thirty years with National Geographic visiting the Okavango Delta and Botswana. There is an active dialog between Frans and the driver- guides to achieve wonderful positioning, for our photography, of the unfolding action. With the sun setting, we leave the lion pride and return to camp. Warm chatter of our day’s experience fills the night air.

Botswana is a very flat country. The water that creates the huge delta here flows from Angola on the northern border into the Kalahari Desert. The water spreads out and creates hundreds of islands of all sizes along its path. It enriches so many different habitats and makes the desert bloom. The islands provide some isolation, protection, and hazards for differing wildlife species. It is dangerous for animals Sitatunga antelope to cross these waterways full of crocodiles and hippos.

Rising before dawn may not always be easy but it is extremely exciting in Africa to take a game drive in the early morning half light. Sunrises are vibrantly colorful with reds, yellows, and blues when you can see the horizon so far away unobstructed by mountains. The Land Cruiser acts almost like a boat crossing several hundred feet of open water. Sitting in a front seat, next to the driver, I lift my feet and gear off the floor as water enters and floods the floor. Its amazing, as we power along, that the waterway bottom has enough traction for the wheels and the engine does not flood and stall in three feet of water.We find the lions and watch them in the soft morning light. The cubs are active, exploring there bounds, one jumping on mother’s back, a pair nursing with their eyes half open, another playing with a female’s tail. The pride begins a trek and spreads out with one female in the lead and Uncle trailing far behind. The lead group finds a waterhole and the still water mirrors their reflections as they drink.

The lead female takes the train of cubs down to the main waterway. Shallow water choked with reeds reaches to the adults noses. The cubs find the water much deeper and are getting completely soaked. Some are gently picked up by grasping the female’s mouth over the cubs heads to be carried through the thick reeds to drier land. It appears to be a big adventure for the cubs as they stay close to the adults and trudge along trying to keep up. 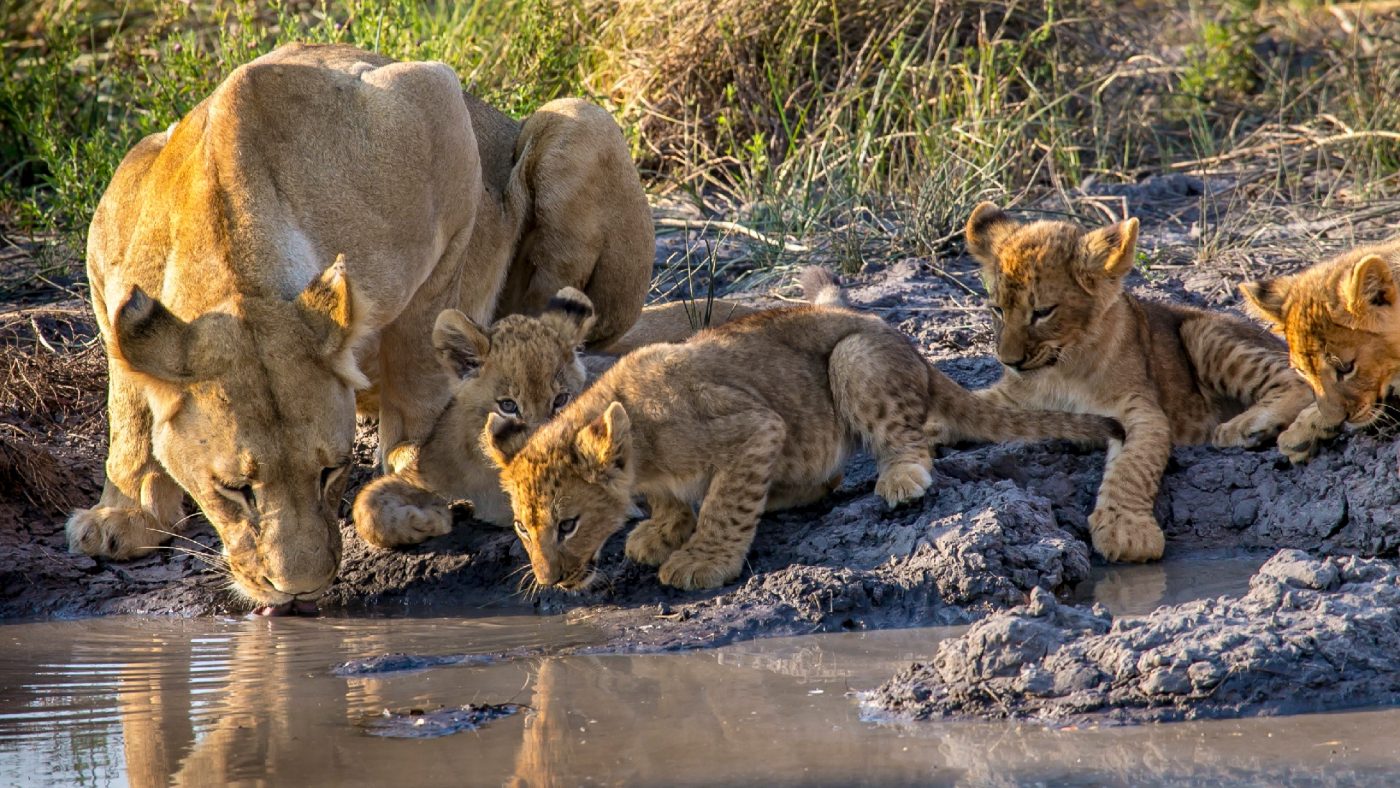 Two of the adult females walk into deep water and the cubs are forced to paddle as they struggle to keep their heads above water. All the cubs return to shore except for our precocious cub. He is in far over his head ten yards from shore. Mother is close by and looks to help him but lifts  him by the tail. His little head is completely under water. To our wide eyes, it appears she is not helping but drowning him. He is paddling very hard now and mother lets go of his tail as he swims behind the lead female to the other shore over a hundred feet away.

The brave little rascal hauls out just a few feet away from me where our vehicle is parked . He runs along the dry shore with two females and seems to have a new bounce in his step. The other six cubs have not committed to the crossing and are still gathered on the opposite shore with one adult lioness. Uncle also made the crossing and Mother seems to have a dilemma. She does not seem to want to leave the bold cub alone with Uncle but most of her family is still on the other side and vulnerable.

Many minutes pass, before she calls the new little swimmer, and they swim back together. This time the little guy needs no help, he swims on his own, he looks strong with his paddling, all the way across on his own. The pride is reunited, even Uncle has made his way back to join them. We have witnessed something quite remarkable with these cubs learning how to swim. Frans expresses: “that he has not seen this before”. Our two drivers also join the conversation and share also that they have never been able to experience this moment in a lion’s life. We are full of joy and tears witnessing this wonder of nature on this brilliant morning.